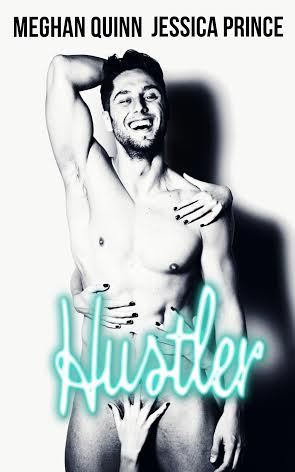 *E-Arc provided by Netgalley in exchange for an honest review*

I make my living as a hustler, and I’m great at it.
I don’t have a single tell and I use that to my advantage to manipulate any situation.
I’ve always known what a person is about to do before they’ve even decided.

That is, until I met Penelope.
I can’t get a read on her, and what’s worse, she doesn’t want anything to do with me.
Which only makes me want her more.

Now I’m in for the hardest hustle of my life.
Somehow I have to convince her she belongs with me.
Good thing I’m always up for a challenge.

Hustler is a book which has left me on the fence, I liked it but I also found I wasn’t a fan of bits as well. Firstly I did like Meghan Quinn and Jessica Prince’s incorporation of popular culture references such as the New Girl reference which Scott and Penelope/ Nell have when he quotes Winston’s ‘Shame, Shame. I know your name’. I’m a big fan of New Girl so I gave the books props for this, it also incorporated with the modern America – Las Vegas setting and drove home that these characters are in their twenties.

Something I wasn’t a fan off was the pacing of this book, I found it to be very skittish – it seemed to jump from one thing to another and as a whole I found that the book lacked build up between Penelope and Gavin. There wasn’t that tension there for me. One example in the book which I would use to show how the book was a bit jumpy was when Nell is about to leave Gavin’s apartment crying because Graham mentions how much Gavin sleeps with other Waitresses, so we begin to see her experience feelings of hurt, questioning if she is just another one of those girls. But then suddenly everything’s OK, she seems to forget all about that in response to Gavin saying he likes her. To me I think this part was a bit unrealistic, I would have liked for the authors to approach this with a bit more detail, perhaps spending some more time on their being conflict between the two as then that may have built up some more tension.

Hustler Alternates POV between Gavin and Penelope, which allows us to get a stronger grasp on the story as we get to experience both protagonist’s thoughts and emotions. This is something I like from a New Adult Romance Book because then I feel like I get a fully rounded reading experience.  In terms of the characters themselves, I almost felt like they switched roles. This book doesn’t include stereotypical male characters who are the 100% masculine, ‘I get what I want’ types they are more feminine and in touch with their feelings whereas other books within this genre seem to have men who are hiding from their feelings. Penelope’s character on the other hand takes on a somewhat masculine role, one that you would stereotype as being masculine in the very least as she is a little closed off and wary of emotions. She is also feisty and she knows what she likes and doesn’t like.

Scott is actually a prime example of how the male characters are not stereotypical males as he is described as being extremely muscly but he also bonds with Nell over New Girl and he constantly wants to talk about feelings and talk to the other guys about relationships. This is a character we don’t necessarily ever see in other N/A Romances, it is a new experience for me as it is usually the female characters presented like this.

I would give Hustler 3.5 stars, this book just fell a bit short for me. I think with a little bit more detail and tension build up between the characters I would of enjoyed it a lot more, I was a fan of the gambling context and Penelope playing a Gymnast wanting to reach her goals as it was something I haven’t read before. This, alongside the subversion of the typical gender roles did make the book have some unique elements. However it did just fall short on the tension and romantic build up.

One thought on “Hustler.”