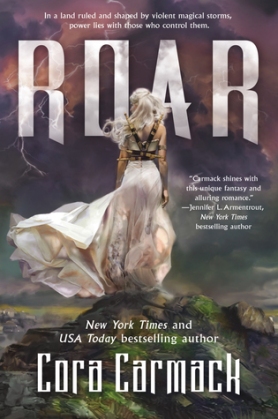 In a land ruled and shaped by violent magical storms, power lies with those who control them.

Aurora Pavan comes from one of the oldest Stormling families in existence. Long ago, the ungifted pledged fealty and service to her family in exchange for safe haven, and a kingdom was carved out from the wildlands and sustained by magic capable of repelling the world’s deadliest foes. As the sole heir of Pavan, Aurora’s been groomed to be the perfect queen. She’s intelligent and brave and honorable. But she’s yet to show any trace of the magic she’ll need to protect her people.

To keep her secret and save her crown, Aurora’s mother arranges for her to marry a dark and brooding Stormling prince from another kingdom. At first, the prince seems like the perfect solution to all her problems. He’ll guarantee her spot as the next queen and be the champion her people need to remain safe. But the more secrets Aurora uncovers about him, the more a future with him frightens her. When she dons a disguise and sneaks out of the palace one night to spy on him, she stumbles upon a black market dealing in the very thing she lacks—storm magic. And the people selling it? They’re not Stormlings. They’re storm hunters.

Legend says that her ancestors first gained their magic by facing a storm and stealing part of its essence. And when a handsome young storm hunter reveals he was born without magic, but possesses it now, Aurora realizes there’s a third option for her future besides ruin or marriage.

She might not have magic now, but she can steal it if she’s brave enough.

Challenge a tempest. Survive it. And you become its master.

Roar is the first book I have read by Cora Carmack. Now if i’m honest, this was a book I purchased based on judging it by it’s cover. I mean look at it?! It’s gorgeous. But have no fear because the story within is equally great.

Roar follows a very unique and interesting plot. In a world of storm magic, Aurora, princess and heir to the kingdom has no storm gifts. A secret which nobody but her and her mother know because it would create tons of questions. How could she become queen with no storm gift? How could she protect her people?
This was one aspect which drew me in from the beginning. Aurora’s mother had done through such great lengths to make sure her daughters lack of gifts was never learnt by anybody else which meant she would change maids every few weeks so none could get too close to Aurora. This gave me an image of Aurora being isolated off from everyone else, she wasn’t allowed to develop strong relationships with anybody but her mother.

Cora Cormack’s writing is so complex and descriptive, every storm featured is different and from reading you can see the intricate detail which has gone into this book. Roar is essentially a book about self discovery within a fantasy world. Aurora must find herself as she sets out with a team of  Storm Hunters on a journey to capture a Storm and attempts to save her Kingdom…but during this journey things start to change for Aurora. She begins to have strange outbursts of emotions such as fear and rage. These outbursts are explained as the story developments but to say the least Aurora definitely goes through some character development.

Now there are a few childish/ cliche things in this book. Things that will make you think what the heck… but the uniqueness of the story and the concept of hunting storms was one which I found really interesting. It can make you look back the more laughable/ cringey moments.

And for those of you wondering… yes there is some romance. The romance element is one which has mixed reviews from other readers, it seems this might be one you love or hate. For me I liked it, it isn’t insta-love, thank goodness... instead it was one of my fave tropes; hate to love. Roar and Locke butted heads along the way, they argued and made up and it made fun reading.

Roar was a 3.5 Star read for me. I loved the uniqueness of the story, I think this book wasn’t overly magical or dealt with the political element of the story but instead focused on the build up to that. Aurora beginning her journey, finding herself and new things about herself out. I definitely can’t wait to read the second book knowing everything I do now.

Have you read Roar before?