Today’s post is going to be a review of The Winner’s Curse Trilogy by Marie Rutkoski. I ran a Poll on twitter to find out if people would like individual reviews for the series or if they would prefer me grouping them together and grouped won. This is going to be something I haven’t really done before so I hope you like this review like this. As always I’m going to try (I shall succeed) to be as spoiler free as possible. 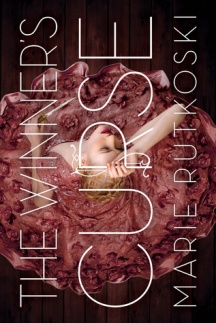 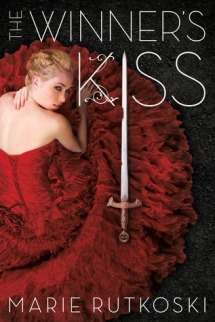 The Winner’s Crime follows 17 year old Kestral, a Valorian young girl, the General’s daughter in a ‘vast empire’ as she purchases a Herrani Slave named Arin. The story then brings with it a slow burning attraction between the pair and slave rebellions all within a power hungry empire which downtreds on not only slaves but woman as a whole it seems. Women have two choices in this society either they can join the military or get married. Whilst the synopsis states ‘Kestral has other intentions’ she pretty much doesn’t and commenting on the trilogy as a whole she ends up doing just what is expected of her.  For me this first book was rather slow and it didn’t pick up it’s pace until at least a third of the way through.

The plot of this book felt lacking to me, whilst it is an expansive world and we need to learn the intricities of it and the history attached to it. I just didn’t feel engaged enough until towards the end when the action picked up. There was too much mundane activity and Kestrall seemed too passive of a character until the ending where she bargains herself in exchange for saving hundreds of lives.

Marie Rutkoski is a talented writer, she definitely has a descriptive skill but for me this book felt like it was lacking especially in terms of its characters because I struggled to feel any chemistry with them. Kestral wasn’t active enough for me, she was rather annoying if i’m honest. She lacked sympathy for the slaves and their history and instead went about her mundane activities of attending balls and playing the piano etc. Between Arin and Kestral relationship, I again didn’t feel any chemistry between the pair. I actually questionned why she was so obsessed with him and wondered if I had accidentally skipped a few pages and missed a moment or two. It is most definitely a slow burning romantic element.

This book also has a love triangle of sorts, Kestral doesn’t necassirily love the other gentleman but he does her therefore we see her two romantic options of the lover who is from her wealth and class and the ‘forbidden’ lover. I’m not a fan of love triangles myself, they do feature ALOT in most YA books and other genres as well but this one (again) I didn’t feel any chemistry. I can get into love triangles if I can feel the chemistry and the tension but for me it was clear which way this relationship would go even if I couldn’t see where the relationship would come from or how it was developing. Stolen glances and stares are one thing but the romantic thoughts just seemed to come out of nowhere.

The Winners Crime, Book Two in this trilogy; definitely picks up a faster pace as Kestral begins to become more involved with the plot, she becomes more than the General’s Daughter and this was when I really started to feel a  connection to Kestral’s character. Until the ending of book one, I felt like Kestral was pretty boring and she wasn’t an exciting heroine. For me I really needed Kestral to be a bigger agent in the action and this is exactly what this book started to bring me as Kestral was now living with her choices of helping the Herrani people by bargaining herself.
Marie Rutkoski expands her world building further as Kestral is now living within the Palace, she is learning how to act, dress etc in line with that of Royality and the Emperor is grooming her into becoming the next in line. It’s interesting to see how Kestral is once again used as a pawn, she is a woman who is showcased however the male character wants her to be and in this case it is showing the Valorian People how she could potentially rule. Whilst Kestral does have some independance as she takes on a role in this book of playing spy, I still saw her linked to a male at all times. She never really seems to have her own independant agency.

The Winner’s Crime also brought with it frustrations in terms of Arin and Kestral’s characters, like always characters seem to lack communication skills. I know it builds up tension and adds suspense but why can nobody talk to each other and explain what’s going on rather than trying to secretly help one another without the other finding out? It frustrates me so much when two characters are continiously running in circles in order to avoid the other knowing why they are acting a certain way. I know it can be used to protect the other character and I can understand that once or twice but for a large majority of the book it felt like they could of ended half of their issues just by talking and understanding one another. It was stubborness and it led me to dislike the characters.
If you want to have characters try to protect one another by hiding something, can they not spend the majority of the book doing this please and just talk to each other after once or twice?!

My favourite book out of this trilogy; The Winners Kiss. This is where the action really picked up its pace and Kestral becomes front and centre in the drama. YAAAY FINALLY! This was the book I really felt a connection to Kestral’s character because she was so present in the planning processes assosciated with the war and she executed them as well. She became more of a heroine rather than passive and we get to see her strength.  There was so much going on in this book and like many Young Adult Series there is usually a war to determine how society will continue, whilst the war was present in this book it was dealt with interestingly in the end which was something very unexpected for me and I didn’t think it would end in that way.

For me The Winners Curse Trilogy was less about the brutality of war and trying to overcome the totalitarian regime by fighting but more about the logical elements.  Kestral is very talented in determining plans on how to win a war, she knows how/where soldiers should be placed and the actions that she and others can take to undermine the opposition, whatever opposition that may be. Arin himself is also very good in this aspect and it was really interesting to see the more logical side weighing up the options instead of ‘ok, so we shall attack here and fight it out.’

This book and the ending of book two also deals with a betrayal. Which I did not see coming. I won’t say who or what happens because it is such a big plot point but Kestral is thrown into a whole new place which could potentially kill her. She has to deal with her emotions and her body failing her just like a beloved character failed her.

The Winners Kiss is where we get to see some relationships really begin to blossom, chemistry is finally here folks. Kestral builds friendships and relationships with a host of characters including Arin and Sarsine. I really started to root for Arin and Kestral in this book and I could sense the tension between the two of them. Kestral in this book is so much more of an exciting character, she is more involved, she is stronger and she has some amazing plans to end the suffering of the Herrani people. She has seen death and been through hell and back herself which transforms her into this whole stronger self.

It was also interesting to see how Kestral’s relationship with her father develops from the first book to this final book. It really changes and this was something that was unique in a sense, usual YA books emphasises family. There is usually a broken family, a death of a parent and in this case the mother was the deceased but the father was ‘present’. However the focus is shifted from family which is one of the things that made this stand out against other series because it was more focused on what is right. You couldn’t forgive her dad anyway if i’m honest..

The Winners Curse series for me was a 3 / 3.5  star read. Once I got through to the second half of the second book and book 3 I felt like the series picked up for me and got more interesting but it still was lacking. This is a series which I have seen amazing reviews for and I think I went in expecting too much from the hype. Kestral is an interesting heroine but I wouldn’t put her up there with the Aelin, Tris, Katniss etc because she wasn’t all that exciting all the way through the trilogy. Overall looking at the series as a whole I feel like she acted exactly as she was instructed by the men and whilst she helped in the slave rebellion she ultimately did what was expected of her as a woman, join the military or get married. However I would definitely still recommend this trilogy and I would say stick it out to get to book 2 and 3 because they do get better and more action filled.

Have you read this series? Let me know your thoughts below!