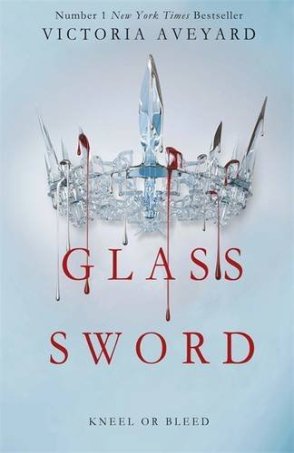 If there’s one thing Mare Barrow knows, it’s that she’s different.
Mare Barrow’s blood is red—the color of common folk—but her Silver ability, the power to control lightning, has turned her into a weapon that the royal court tries to control.

The crown calls her an impossibility, a fake, but as she makes her escape from Maven, the prince—the friend—who betrayed her, Mare uncovers something startling: she is not the only one of her kind.

Pursued by Maven, now a vindictive king, Mare sets out to find and recruit other Red-and-Silver fighters to join in the struggle against her oppressors.

But Mare finds herself on a deadly path, at risk of becoming exactly the kind of monster she is trying to defeat.
Will she shatter under the weight of the lives that are the cost of rebellion? Or have treachery and betrayal hardened her forever?
The electrifying next installment in the Red Queen series escalates the struggle between the growing rebel army and the blood-segregated world they’ve always known—and pits Mare against the darkness that has grown in her soul.

I am officially 100% hooked on this series. I know in my last review I said I was thankful I missed the hype and picked it up later so I didn’t have any expectations but I wanna kick myself so bad right now that I’ve not had these characters in my life sooner. I also ADORE the book covers.

Well that little tagline makes it sound so omnious doesn’t it. Yes there’s deaths and they are sad and I didn’t see the coming. Which is such good writing but WHY VICTORIA WHY?!

Whilst Red Queen focuses on Mare trying to learn who she is whilst pretending to be in a Royal House, Glass Sword focuses on her preparing for a bigger role in the war and navigating this world after being betrayed. I read some reviews that people got bored with the slower portions of this book but honestly stick with them. They all mean something!

Sometimes I find with series that the second book lacks something, it’s usually a weak link. But for me I absolutely adored Glass Sword as much as Red Queen. It was so consistent in the writing style, world building, tension, pace AKA. EVERYTHING.
But one thing I really liked about this book was how it continued where Red Queen left off. I hate when a second book in a series returns from a cliffhanger with a passage of time and then the writer just throws in a flashback to fill in the gaps. Thank the lord this one isn’t like that. It picks up where you left off and because of that I didn’t lose the gripped feeling I felt being thrown into the tension of this world.

In terms of plot Glass sword is filled with so many shocks and I never saw any of them coming. There’s further betrayals, deaths and I was kept on my toes wondering what was real or not after the biggest betrayal in Red Queen. Which of course I cannot reveal because as I always say “nobody likes a spoiler sue.”  However as we hear this story through Mare’s own narrative you really feel the extent of the betrayal take it’s toll on Mare. She develops further serious trust issues and as a reader I felt like I ended up questioning everyone’s motives.

Secondly Glass Sword was also really interesting to me because Mare and Cal are now removed from the Royal Circle and placed outside in a hostile environment. I love how this book is their survival outside with basically everyone on the hunt for them, but also it shows them training and setting out on their own mission to find NewBloods. If you like a book that has so many different elements to it then honestly I cannot recommend this more. There is so much going on inside this one war but it is so intricly done so you don’t feel confused or overrun with information.

If you had to choose your favourite characters?
I CAN’T! Honestly I’m a true Cal and Mare shipper but I also still have a soft spot in my heart for Maven.

As mentioned in my Red Queen review, I really like all the characters in this series. By that I mean I don’t want to skip over any parts with certain characters because I find them annoying. I absolutely love Mare as much as I did in the first book, I find her so strong, witty and just a fun heroine. I love her power of lightening and how she can produce it without having to have a storm/lightening present. Glass Sword allows us to explore more of her ability and those who are like her which I LOVE. It is also very much focused on her inability to trust because of the betrayals she’s faced.

Now do I mention my Book boyfriend #1203… Cal. I’m in love with this boy.
Like Mare, Cal’s journey throughout this book is focused on his inability to decide which side to be on. Yes he is with the Scarlett Guard but he still has this strong moral battle of whether he is willing to kill Silvers. Which is really interesting as he grew up with them, he is now trying to live a life outside of the Silver Royal World; the world he is comfortable in whereas Red Queen was Mare’s struggle to live outside of her Red world. I love the contrasting storys!

Glass Sword was very much a 5 star read for me. I devoured it.  I love Victoria Aveyard’s world building and found I couldn’t put the book down. There is so much going on in terms of plot that you are always kept on your toes, also there is mystery added to it as Victoria Aveyard continuously drills into you that anybody could betray you. Therefore you question everyone. I can’t wait for Kings Cage.

I’m a serious Cal and Mare Shipper but who knows what could happen with this?!

Want to try Glass Sword? Here’s where to find it

4 thoughts on “Glass Sword by Victoria Aveyard | KNEEL OR BLEED”